Her official title would be Shop Manager but she’s so much more than that.
Naomi organises the day-to-day managerial tasks of the shop. She organises Valerie’s and my appointments, clients and schedule months into the future and makes our work lives as simple as possible so all we need to think about is doing good tattoos. She acts as personal assistant to Dante DiMassa, organising his shop and life.

I know that Naomi dislikes having cameras pointed at her so it took a while for me to secure the interview that this clip is taken from. True to form, her affection and dedication to Frith Street Tattoo overcame the desire to stay out of the limelight.
I’m really pleased she agreed to do this interview because she’s such a major part of what makes FST what it is on a day-to-day basis that not having her be part of this project would feel like I was hiding something important.

If you see Naomi at a tattoo convention or tattoo shop somewhere in the world, please don’t take her picture.

The boys I from last week’s clip are the ones who roll their sleeves up and do the dirty work but Naomi makes sure it happens on time, safely and without interfering with people getting their tattoos.

She’s a carer, facilitator, friend and confidant who has our complete trust that she’s doing things for the good of the team at the shop. If Naomi was older we’d call her Mother Goose but she’s not, so we can call her the FST Lady with the Lamp.

These guys are the front line at Frith Street Tattoo.

One night, after work we shared a pizza, a couple of beers and a chat.
Here they talk about their first experience with Dante DiMassa (Danny), the glamorous nature of working at a busy, well-known tattoo shop, working with people who love tattooing and then a message for the rest of the crew at FST.

Well, it’s not really a blooper. Nothing went wrong and I’ll use this clip in the finished version of Part One: A Film for All and None. It just makes for a more interesting title than “Phone Call”

While I was working my way through the edit, I decided to share this clip. I think it highlights both Oliver and Jordan’s approaches to life, tattooing and each other. Like any comedy duo, there’s a straight man and and a banana man. Other than myself and Oliver, Mario Desa was present for the interview – you may be able to hear his voice one or twice. Enjoy.

Following my announcement last post that this project will be a series rather than a single movie, I’ve put together a trailer:

“Almost two years in the making, FST: On the Shoulders of Giants is Stewart Robson’s intimate portrait of life in a modern, highly respected, world-renowned tattoo shop.
Spread across four parts, Stewart interviews resident tattooers, guest artists, customers, and staff to offer a glimpse into what makes Frith Street Tattoo tick. With no candy-coating, the FST crew shares their views on tattoos, the people who do them, the people who get them, and the world of tattooing in general.

Entirely self-produced, directed, and edited, this film stands as an honest portrayal of Frith Street Tattoo in 2012 and 2013.”

Please share it, tell your friends about it, post it to your blogs and tumblr, watch it and wait for the Part One…

Part One: A Film for All and None is still a couple of months away. There are a few conventions coming up and I’m editing this thing in my spare time, whatever that is. Keep your peepers peeled.

I have a new member of staff to help me speed up the production: 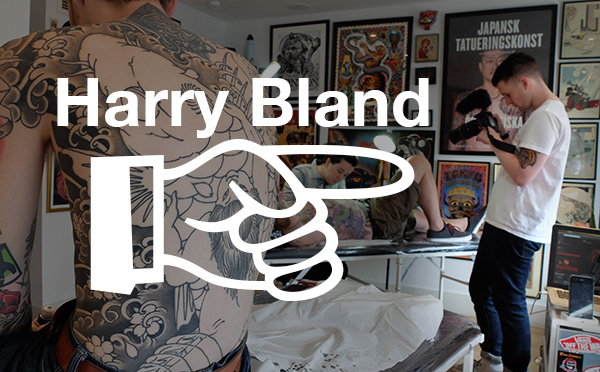 Less exciting but I’ve also moved the site to a real domain name instead of a x.wordpress.com name.

News!
I have Assembly Edits of each section of this film completed.
What’s an Assembly Edit? Well, it’s the sequence of clips I intend to use, assembled in the order I intend to use them.
This is a major milestone in the development of this project. After weeks (months) of logging footage, marking transcripts and moving pieces of cut up paper around, I finally have something that resembles a film. Albeit without any supporting images, footage or graphics but it’s still possible to watch it, rather than imagine it. As it’s been up until this point.

News 2!
Yes, I said ‘each section’ up there.
My original plan was to make a film that served as a portrait of Frith Street Tattoo as it stands today. It seems I made four films.
While organising footage and making notes I wanted to divide the film into four subject areas to make it easier to watch. After I assembled the footage, weeding out extra repetition and less interesting parts, I was left with enough useable footage to make 4 films each at least 20 – 40 minutes each. I hope you lot have the stamina to sit through them all. Each one has a different feel and flavour.

Here’s a run-down of the working titles:

Part One: A Film for All and None
This film centres around the Frith Street Godfather, Dante (Danny) and the family atmosphere of the shop.

Part Two: The World is Watching
This one highlights the position of Frith Street Tattoo in the world of tattooing as a whole and the responsibility that entails.

Part Three: Standing on the Shoulders of Giants
A film about the direct lineage of Frith Street Tattoo and the tattooers and people who allowed us to be where we are.

Part Four: We Never Sleep
(my favourite section so far – I’m really pleased with the way this one came together)
This film spotlights the work and effort that goes into striving to make each tattoo better than the last and the results of that effort.

I never planned to sell this project but because it’s turned out to be way bigger than originally intended (and thought possible) I’m considering various forms of distribution. My favourite at the moment is to have each section free for a limited time, then offer high quality downloads or a DVD compilation with tons of extra footage that just didn’t fit with the themes of the films.

Right now I’m working on a trailer for the series. As soon as it’s finished I’ll post it here and on Youtube.

In the meantime you can check out some behind-the-scenes photos of how I got to the assembly edits.

Marking the Transcripts:
This took a hell of a lot longer than I originally expected.
I had a huge folder of transcripts to wade through. Each colour pen pertains to a different theme. Yellow – Part One, Pink – Part Two, Green – Part Three and Blue – Part Four. 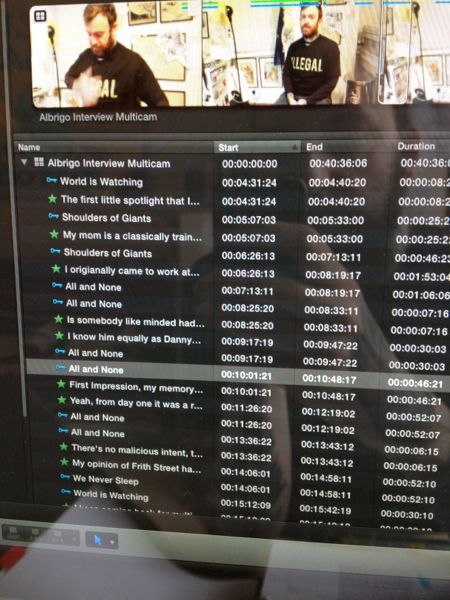 Arranging the Paper Edit:
After numbering each marked clip I could cut out the marked sections of transcript and begin to arrange them into sub-categories.
Some are for the intro to each section, some for the middle, end, etc.
Then I can start moving them around and deciding how the narrative flows. Once I’ve arranged each section, I paste them onto sheets of paper. These sheets serve as a ‘script’ to the film. 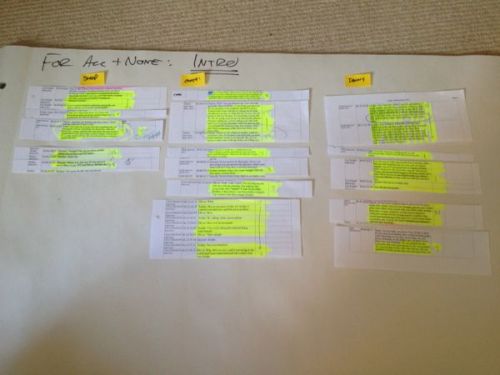 Then it was a matter of finding the numbered clips in the edit software and placing them on a timeline according to my paper edit.
Now comes part where I re-arrange things a thousand times and make transitions and edits smoother, add photos and supporting footage than I’ll be ready to show a rough cut to friends and family for them to review.

Keep your eyes peeled for the trailer.

Danny Woodruff is at present, the only person working on this film other than myself.

Danny usually works in Manchester, England. He’s currently working away from home in Bordeaux, France. He fills his evenings and time off work transcribing the interviews for me. Transcriptions are a vital part of editing a documentary film.

Currently I’m working through the transcripts of the 20+ hours of interviews I have so far. On printed pages, I mark the suitable sections then these sections can be marked, labelled and catalogued in the editing software. I’m around half way through this first stage of the editing process. Actually cutting together a film longer than a few minutes is almost impossible without transcripts. The next stage is a ‘paper edit’.

I owe a huge debt to Danny for helping me with this.

I interviewed Danny recently. Partly as a long-time customer of Frith Street Tattoo and partly as a ‘staff’ member (or volunteer) of this project.
Before we get to the clip, Danny had this to say:

I’d like to state an aside that in fact my opinion with regards to tattooing really isn’t worth that much. I’m not a tattooer, nor do I aspire to be one. I’m a scientist but I love tattoos with almost the same passion I love science. My opinions are just that, my opinions and I’m very grateful that Stewart thought they were interesting enough to share with you.

I feel very honoured that Stewart allowed me to be part of this project and in some way repay him for the confidence and better life that the tattoos have given me. I’ve enjoyed every moment of transcribing the interviews and I’ve learned a lot more than just a “normal” customer would. Listening to the interviews has made me want to get tattooed by people I previously wasn’t sure about as well as made me reconsider a number of views I had about tattooing as a whole. As well as this it’s allowed me to take a part of Frith Street with me to a different country meaning I’ve had my own little escape that Frith Street normally provides.

Frith Street to me is a lot of things but whenever I think of either the shop or the artist that work there I’m always reminded of quote from Tony Soprano, “What happened to the strong, silent types?” Frith Street is the personification of a strong, silent type. Frith Street doesn’t whine about things, it doesn’t try to be something else, it just does good tattoos. For me working on this project has really driven that point home. This project isn’t a promotional tool or a “reality show”. It’s an honest portrait of a shop just trying to make good tattoos.

For me Frith Street is what a tattoo shop should be and what others should aspire to. I know I’ll continue getting tattooed there by as many artists as possible until I run out of room.

Thank you Stewart for letting me help you and for all the laughs and insights these interviews have given me. I don’t think I would have stayed sane in my flat in Bordeaux without them.

Will and Scott have been getting tattooed at Frith Street for around 4 or 5 years.
They are part of a group of friends who all have serious work from various tattooers at or associated with, Frith Street.
Scott and Will were in town for tattoo sessions with Valerie to continue ongoing work so I took the opportunity to interview them both together.

In this clip Will & Scott talk about why they get tattooed at Frith Street, how we’ve introduced them to a wider range of tattooers and the community aspect of getting tattooed.
Then they show and talk about the tattoos they have.

I took these pictures at the London Tattoo Convention in September 2012. A few of the guys with backpieces are missing from the photo and the ones who just have sleeves are out of frame too. 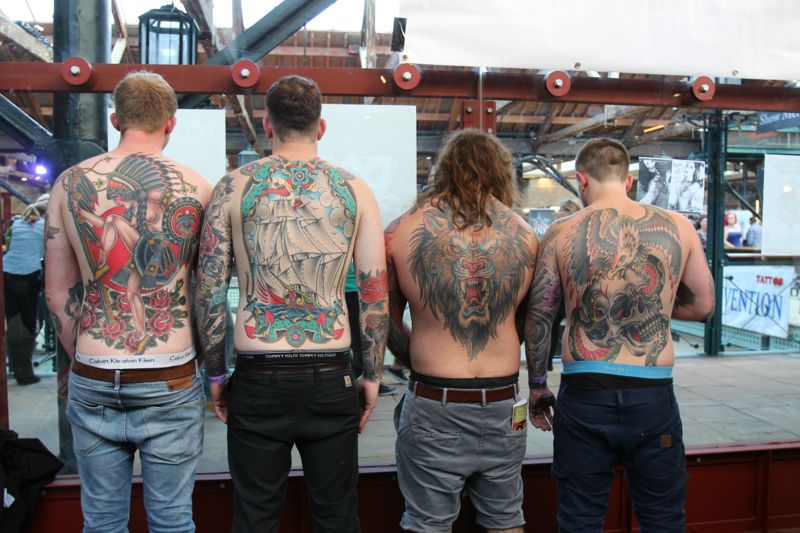 One of their friends has a great “Rock of Ages” backpiece from Jordan Teear but he wasn’t at the convention that day.
Thanks Guys.